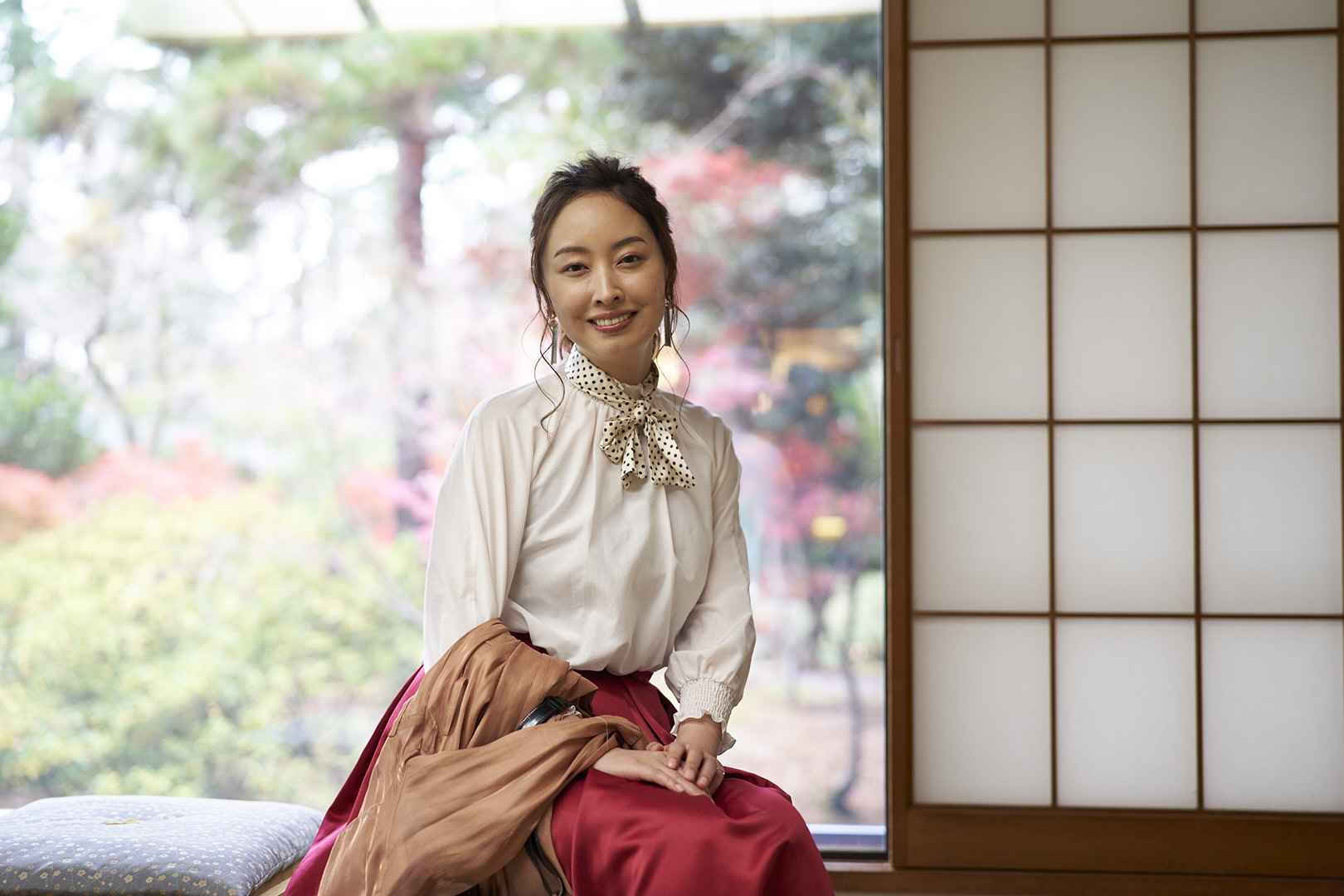 Established in Tenpo 7 (1837) during the Edo era. This hot spring inn was also the setting for the novel “Umi no Naru Toki” (The Time the Sea Rang)", penned by the Meiji era novelist Kyoka Izumi. While retaining the atmosphere of a long-established inn, the hotel is fully equipped with facilities including an open-air hot spring bath at its source. Known as a ryotei ryokan (traditional Japanese restaurant and inn) surrounded by a garden, the new and original structures both have their own kitchen where traditional Japanese cuisine is prepared with local ingredients by each of the chefs, and has gained an excellent reputation. Tatsunokuchi Onsen, where countless people have visited for healing, is said to have been opened by Taicho, who was also responsible for opening Hakusan during the Nara period (710-794). Although the source of the spring was buried by the flooding of the Tedori River during the Muromachi period (early 14th to late 16th century) and closed for some time, Jinshiro, the founder of this inn, unearthed a new source of the hot spring and established the "Matsusaki Ryokan" in Tenpo 7 during the Edo era. The history of Tatsunokuchi Onsen had started once again. According to records from the time, the inn was so prestigious that guests would change their clothes before arriving. 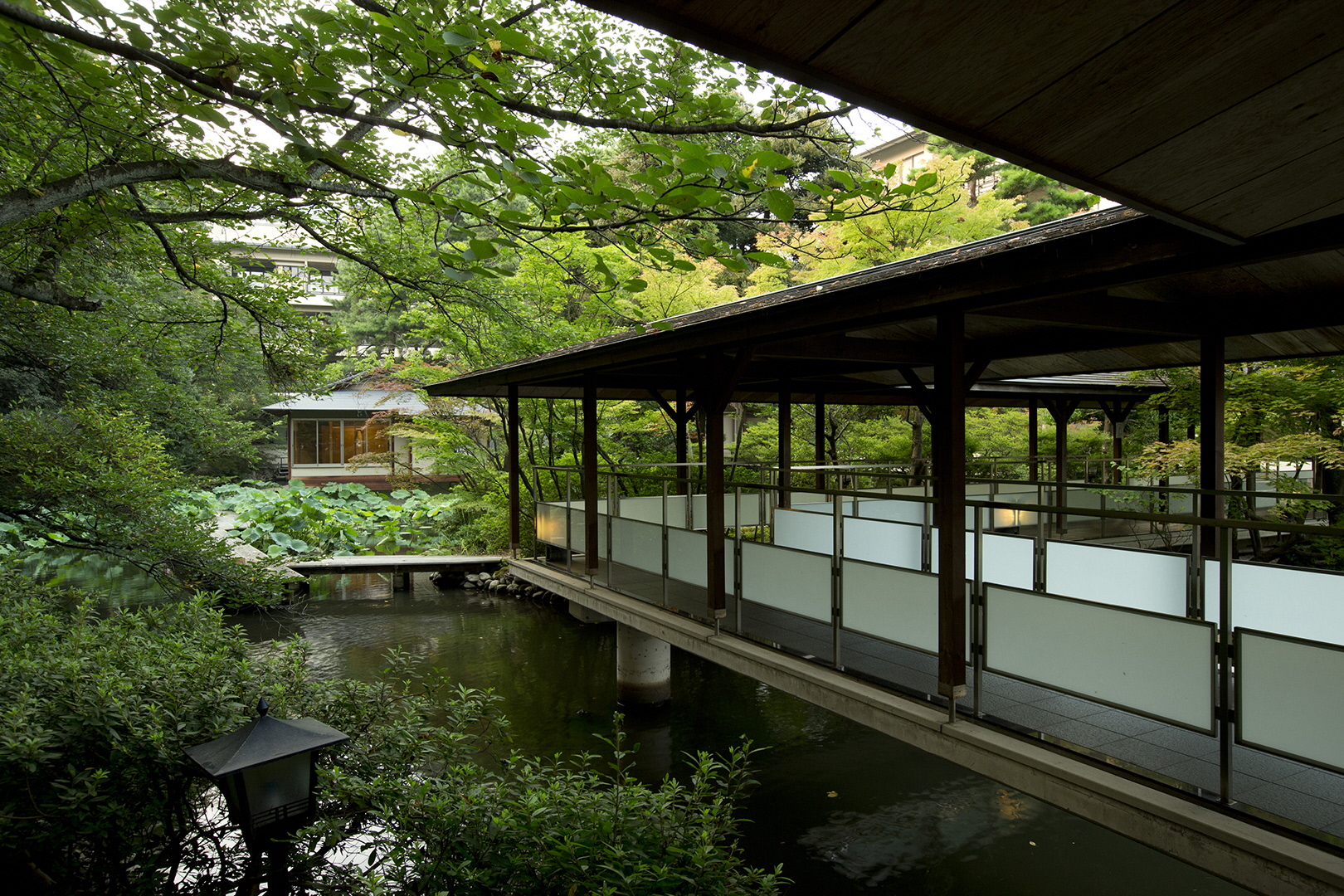 The first thing that welcomes guests at Matsusaki Ryokan is the 5,000 square meter Shosen-ko Garden. Taking the corridor across the pond “Shosen-ko”, to the entrance, koi can be seen as if they are greeting the guests of the inn. The trees that surround Shosen-ko are full of rustic charm. Cherry blossoms bloom in spring and lotus blossoms in the summer, the leaves of the trees turn a beautiful red in the autumn. And in the winter, the whole garden is coated with snow. All four seasons can be enjoyed in the cool of the evening, after taking a bath, or strolling around before and after breakfast. 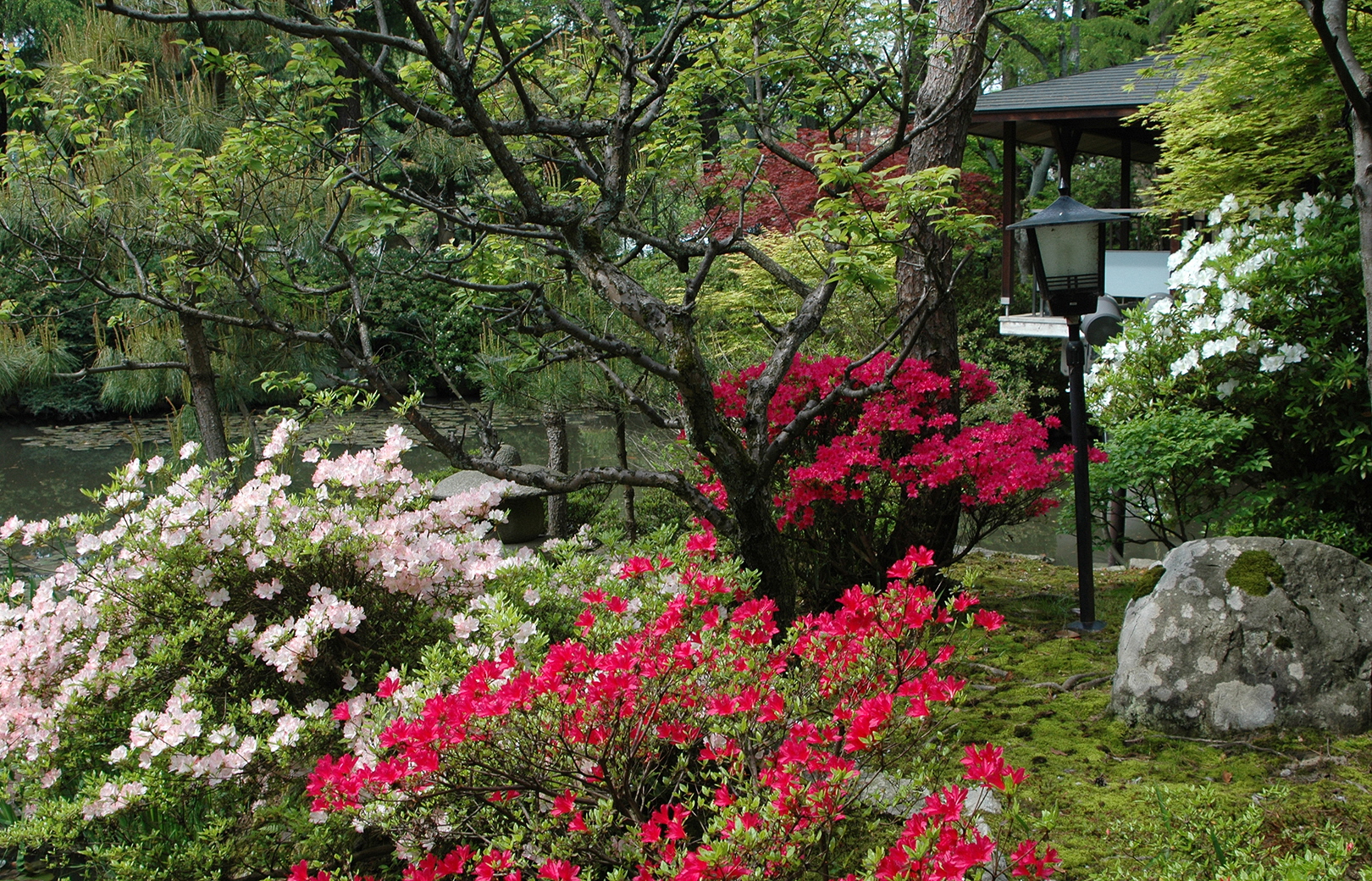 The source of the spring was excavated in the garden, and is a mild alkaline sodium sulfate and chloride spring. A smooth hot spring that is said to be effective for diabetes, obesity, cold sensitivity, gynecological diseases, generally promoting health. The large communal bath faces the Azuchi-Momoyama Garden, which is steeped in history. There is a large bathtub with a temperature of 40 degrees Celsius and a source bath with a lower temperature of 36.5 degrees Celsius, and it is possible to take "alternate baths" by going back and forth between two bathtubs with different temperatures. It is said to improve blood flow, effective for stiff shoulders and back pain. The open-air bath with a view, "Mokusei", is a relaxing and pleasant all-wood hinoki cypress structure. The "Gyokuryu" is an open-air bath made of stone, appearing to be one with nature. There are also indoor baths, saunas, and the open-air baths also have baths which allow you to lie down. Overlooking the sacred mountain, Hakusan, and the garden of the inn. Winter may provide the opportunity to view egrets nesting in the garden. The Shirasagi (egret) is a bird with many legends concerning the origin of the establishment of hot springs in nearby Yamanaka Onsen and Gero Onsen in Gifu as well as Dogo Onsen in Ehime on the island of Shikoku. 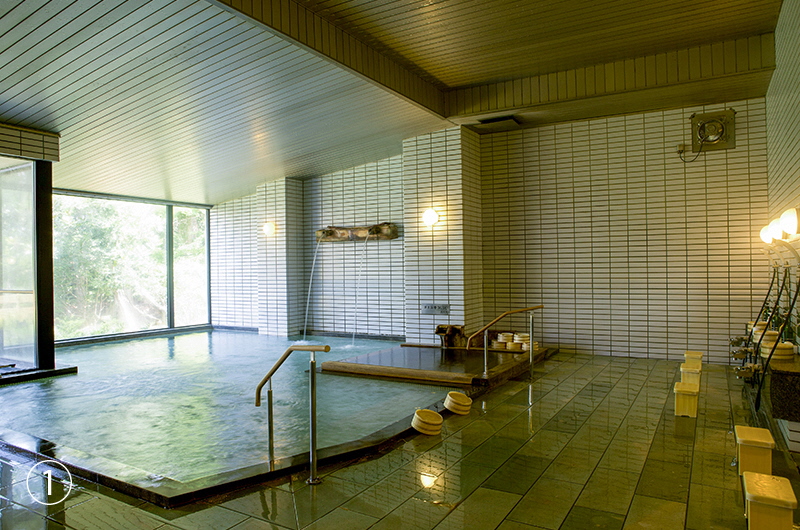 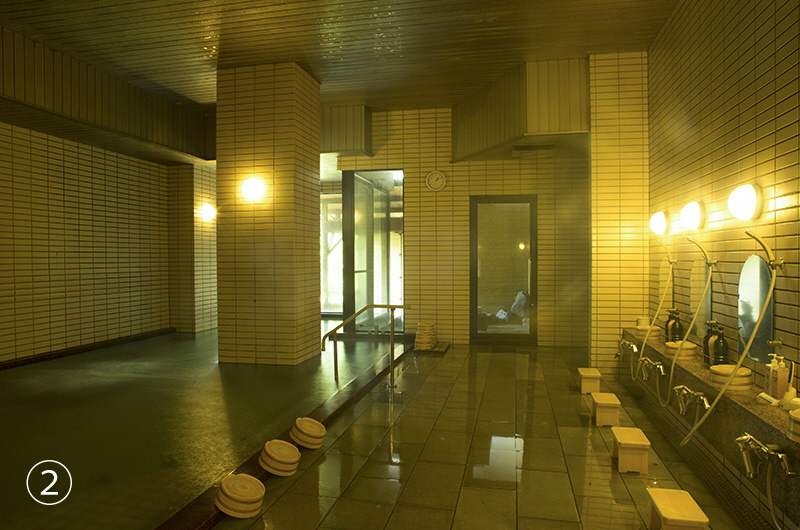 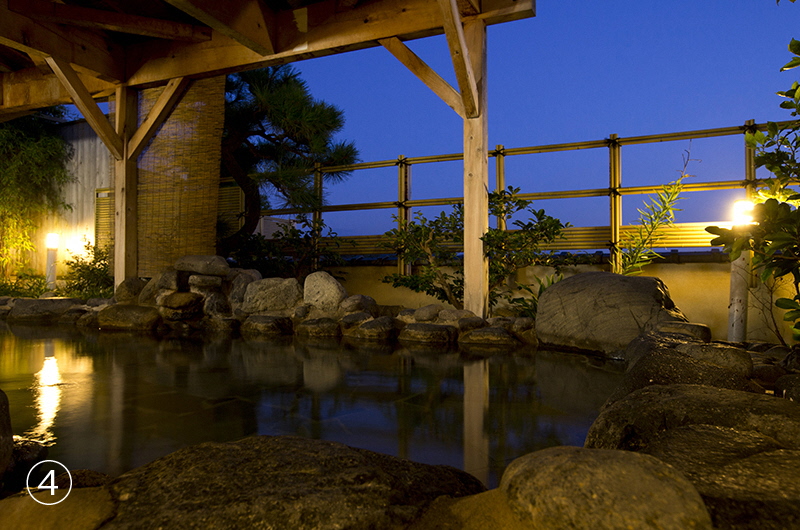 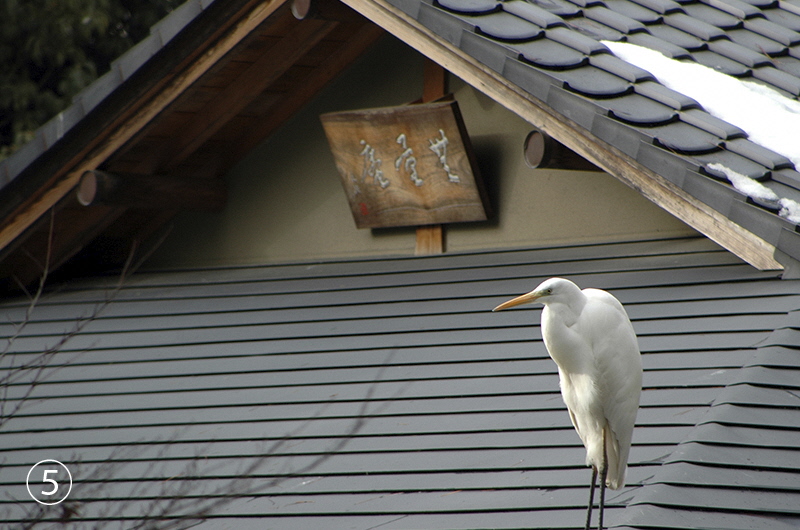 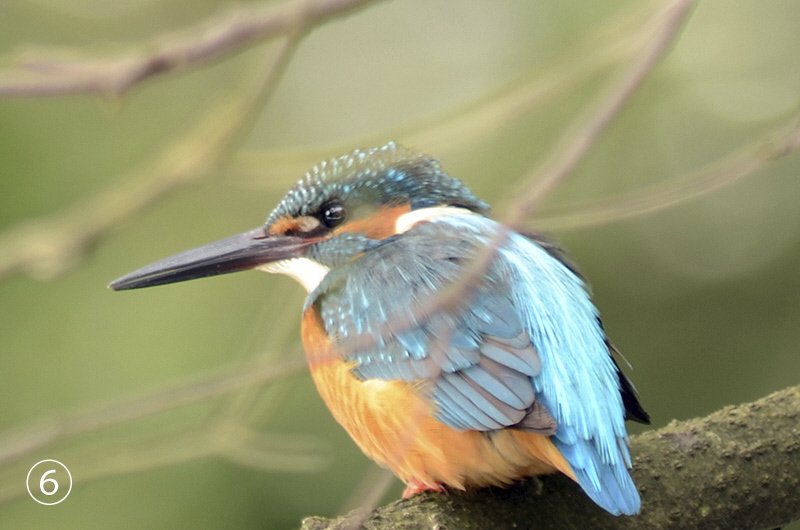 The tea house "Muryouan" is located in the Shosen-ko Garden. Guests staying in the new building, Houou, which has an open-air bath in every room, will be served green tea upon arrival. The hallway leading to the tea room has a heart-shaped window, a cute photo spot in the middle of such a prestigious ryokan. From the circular window of the tea room, the varying scenery of the four seasons can be seen, almost like a piece of Japanese art in the form of a single painting. An eternally unchanging circular shape, without any corners, provides a healing effect. 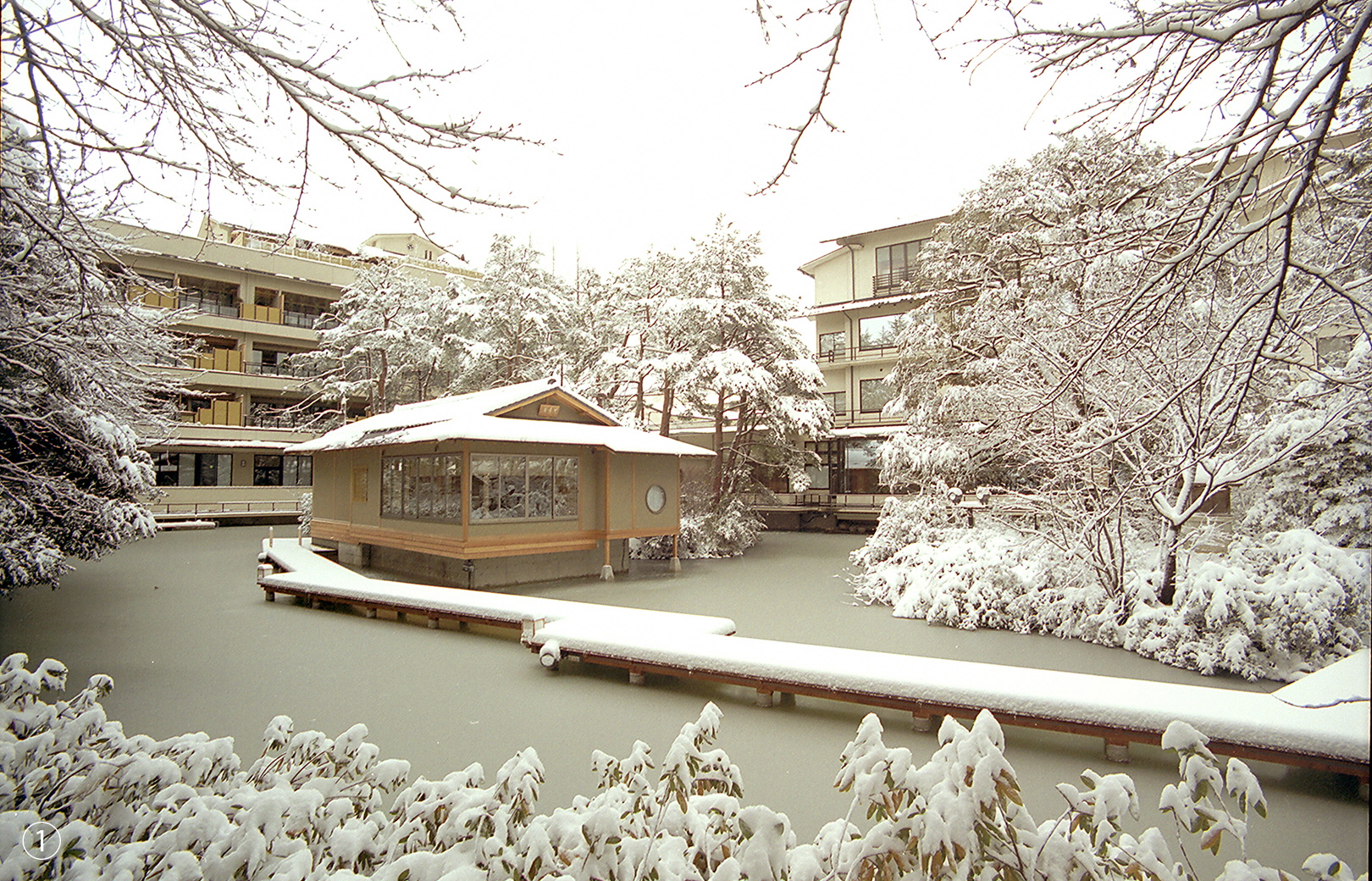 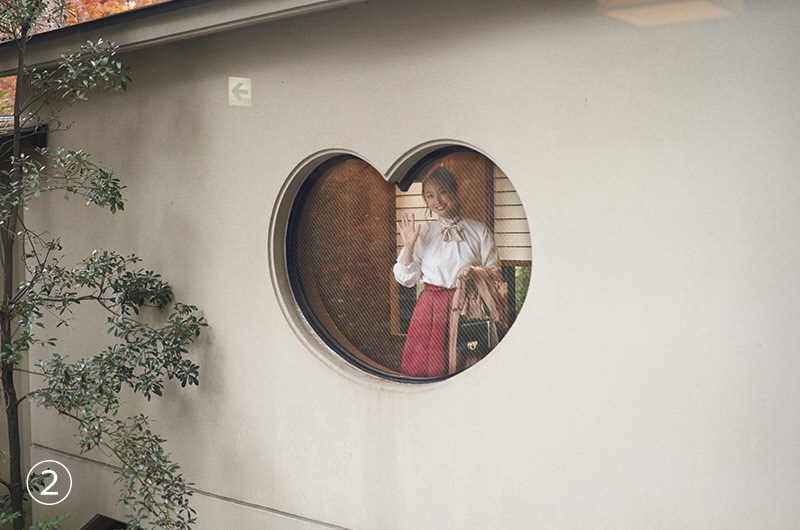 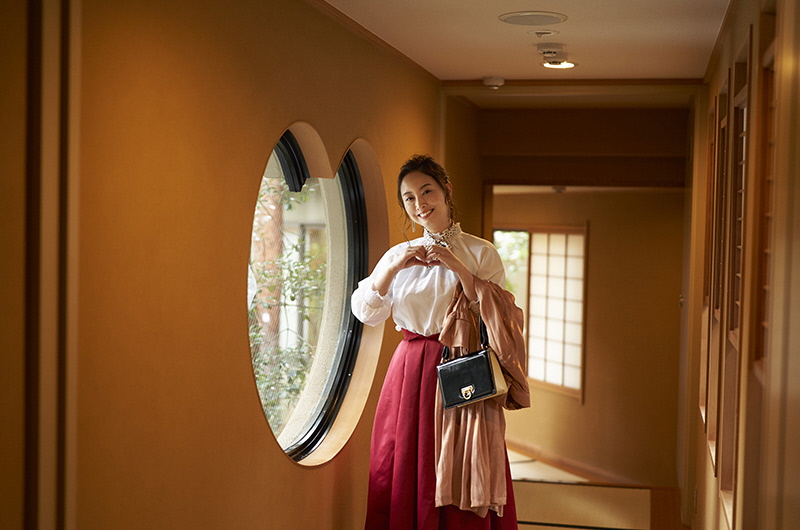 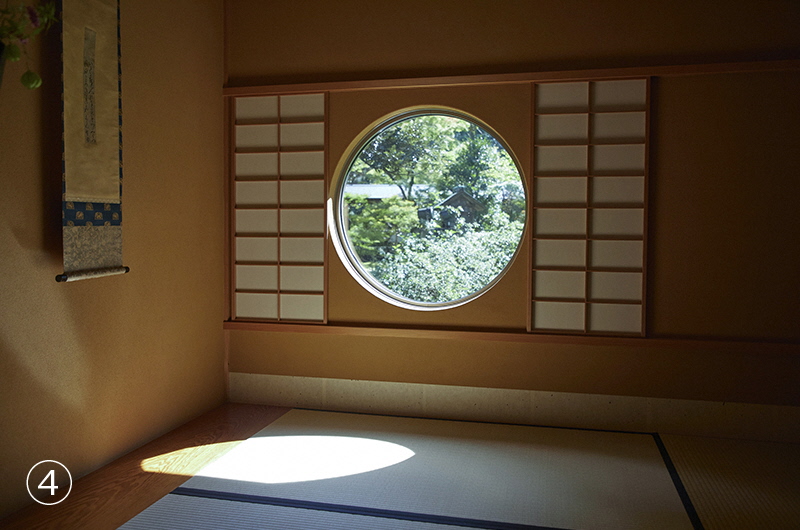 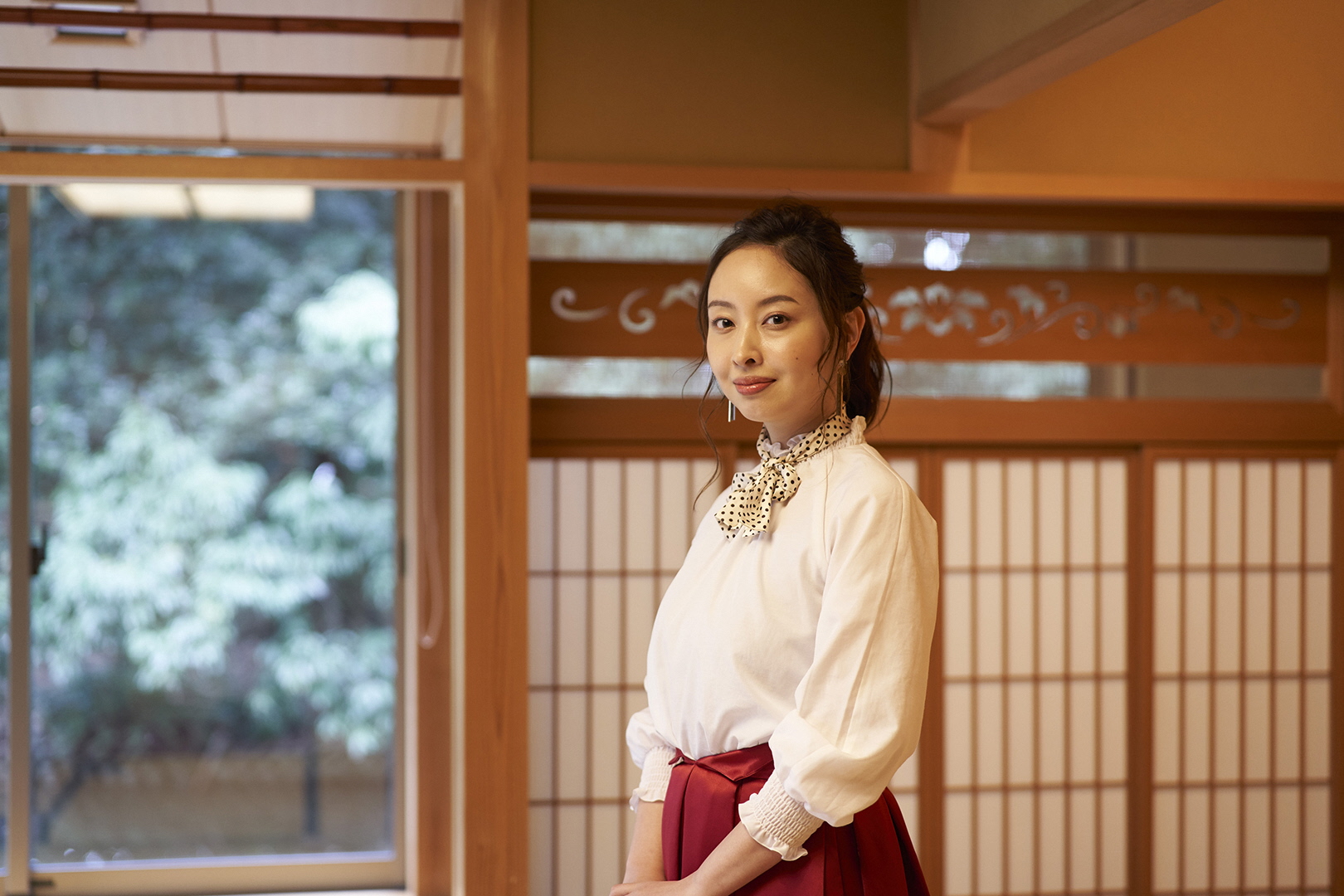 From the rooms in the main wing you can enjoy a view of the garden during each season. The main wing is divided into four structures, of which Zuiun has the largest number of guest rooms and is the most popular with views of the hotel's garden. Rooms with an open-air bath are located in the Shouju and Momoyama buildings. The Houou wing has hot water drawn directly from the source of spring to the open-air baths and interior baths of the guest rooms. The interior baths are always running, so guests can warm up before stepping out to the open-air bath. Some of the rooms are of a combined Japanese and Western style Sukiyazukuri (tea room style) that can comfortably accommodate two families, with a traditional Japanese room and a bedroom with twin beds. Opening the curtains of the sun room, the lush garden, a view almost like a painting, can be seen. A relaxing atmosphere to take a break from the outside world. 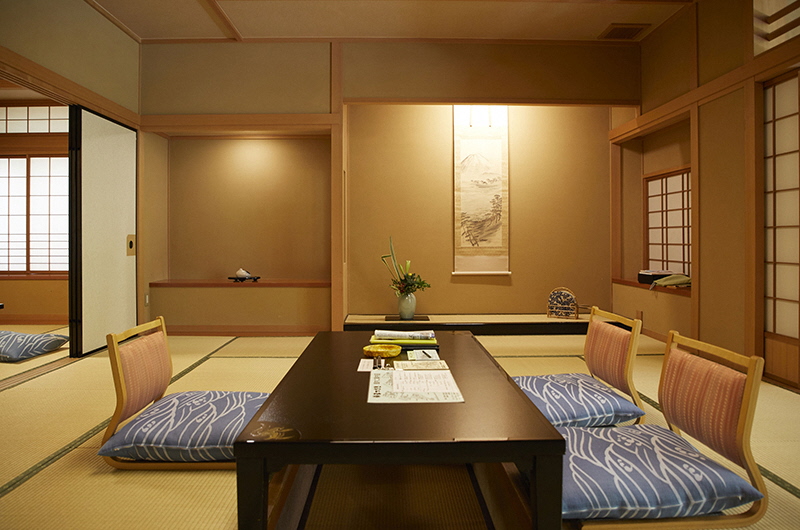 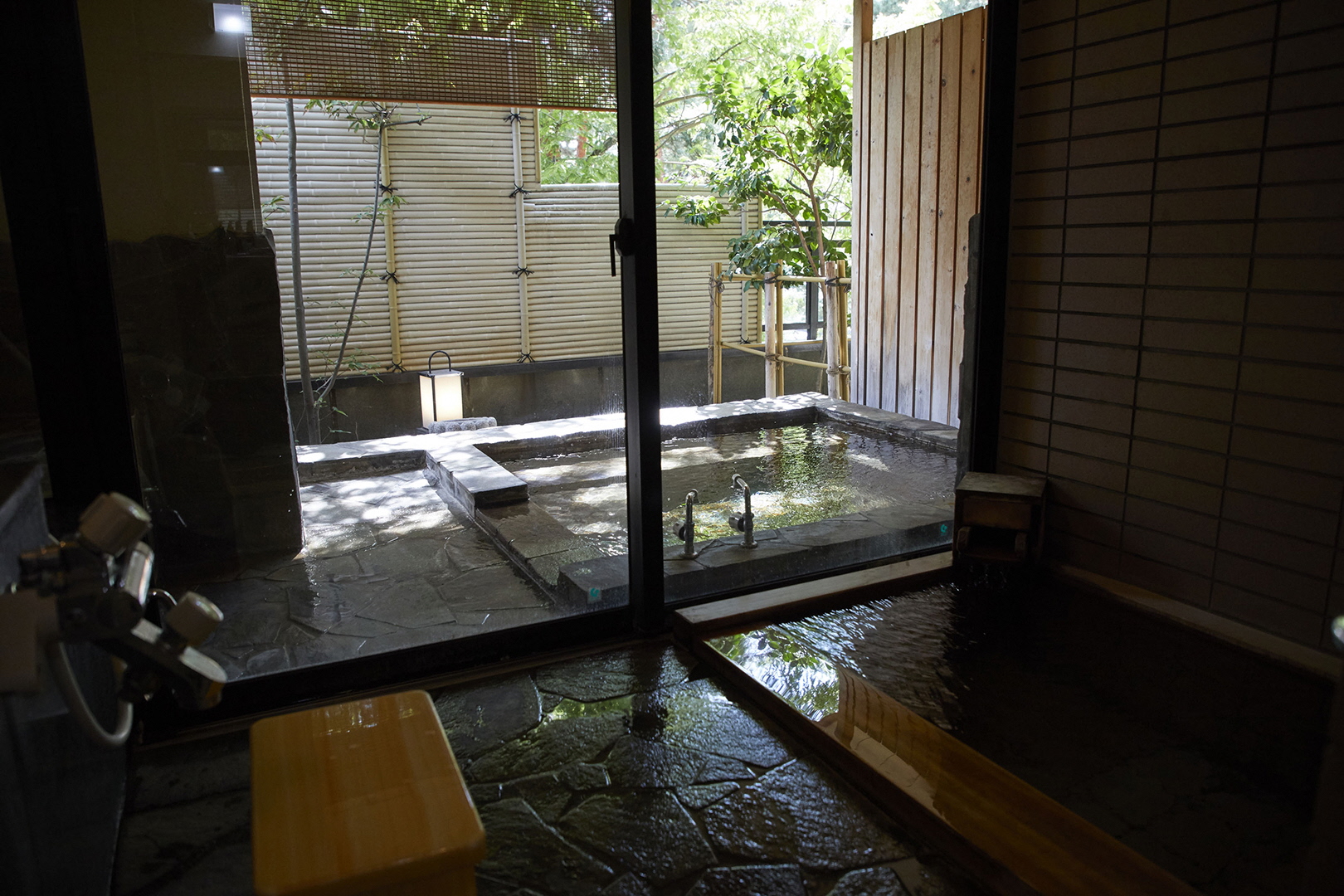 Some rooms are barrier-free without steps, allowing easy access for elderly and wheelchair-bound guests. 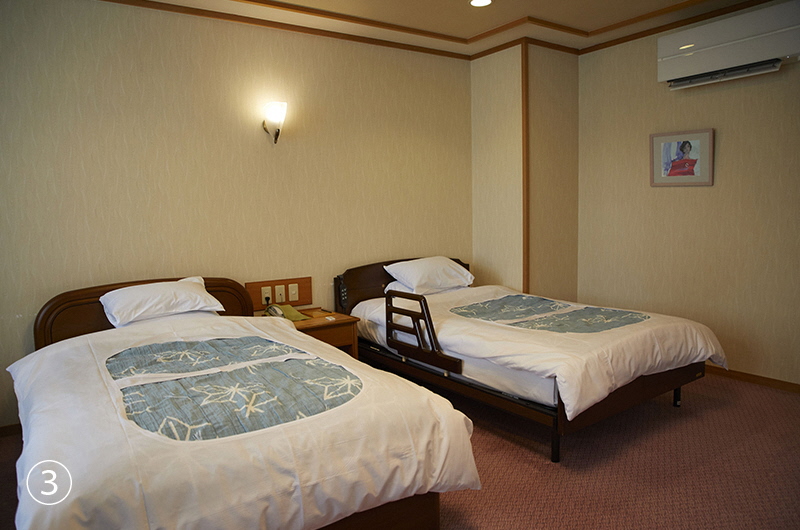 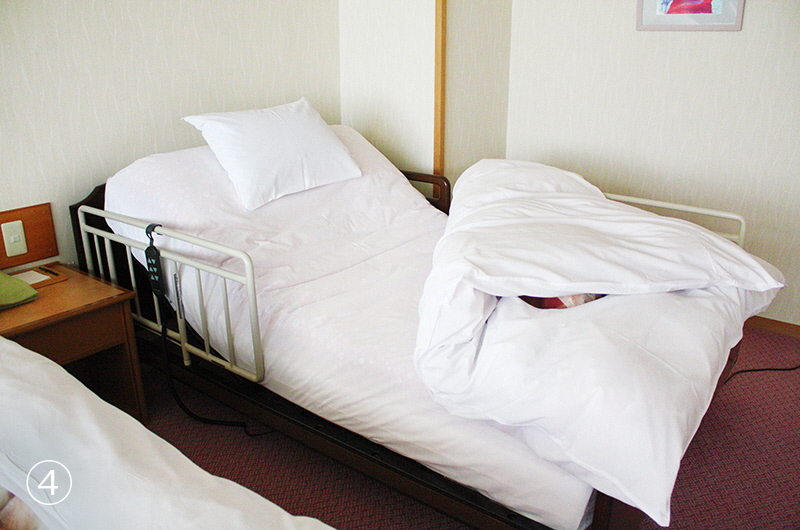 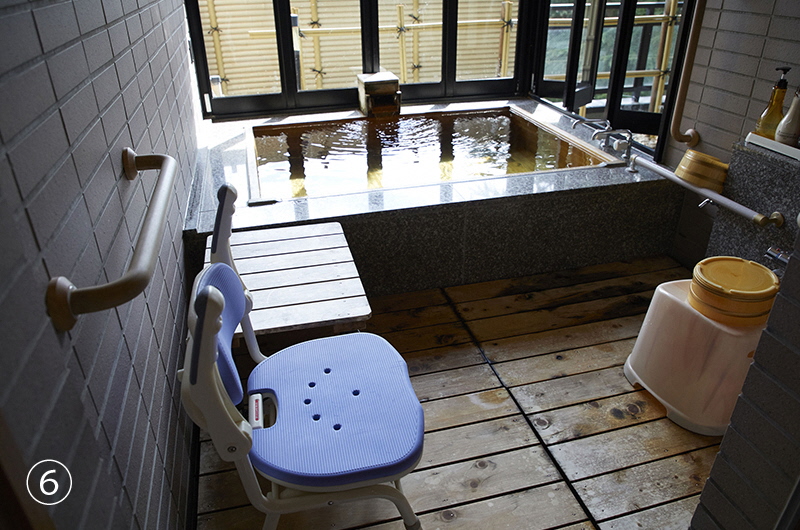 1） Barrier-free Japanese/Western-style rooms  2) Room with flat floors, minimal steps and sliding doors.  3) One bed has reclining features and can be operated by remote control.  4) The reclining bed is equipped with removable handrails  5) The washrooms are large enough for wheelchair access and are equipped with handrails.  6) The bathroom, which is wheelchair accessible, can also be enjoyed as an open-air bath by opening the glass door.

And the meals. The "Houou Kaiseki" served in the new wing Houou, prepared by the chef who has accumulated the knowledge and techniques of the exquisite cuisine of Kanazawa, using an abundance of locally sources seasonal ingredients. Each dish is prepared with care, timed to be served at the optimal moment, so every food item is at its freshest. If notified at the time of reservation, children’s meals and baby food can also be prepared. Additionally, there is the "Houou Special Noto Beef Kaiseki", prepared with precious Noto beef, a rare breed of cattle, of which only 550 are made available every year, served as sushi, steak and three recommended dishes. Also the “Houou Kaiseki”, a lighter meal focusing on quality ingredients, and the “Zeitaku Kaiseki” with sushi and Wagyu fillet steak. Every meal will satisfy the most discerning gourmet. 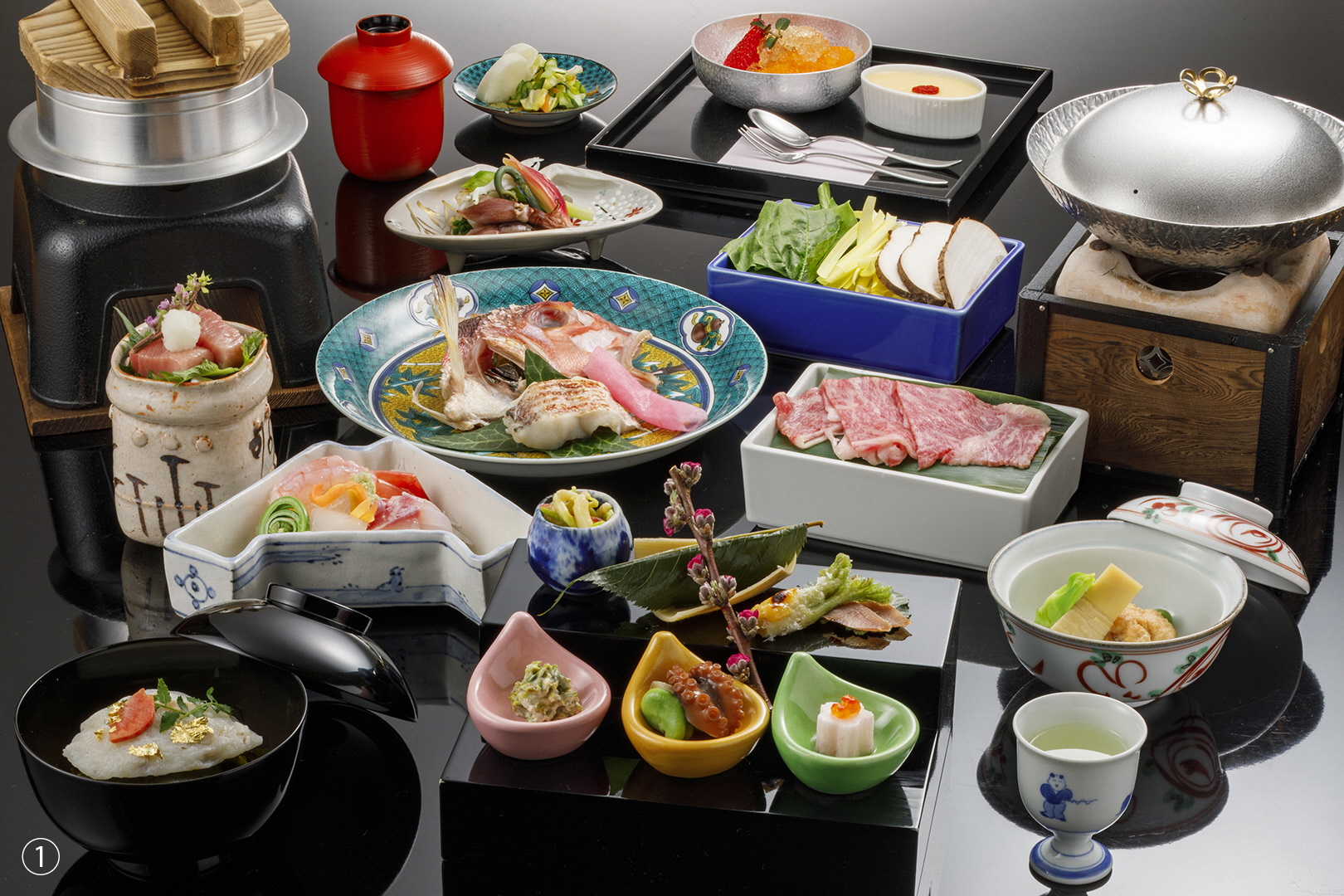 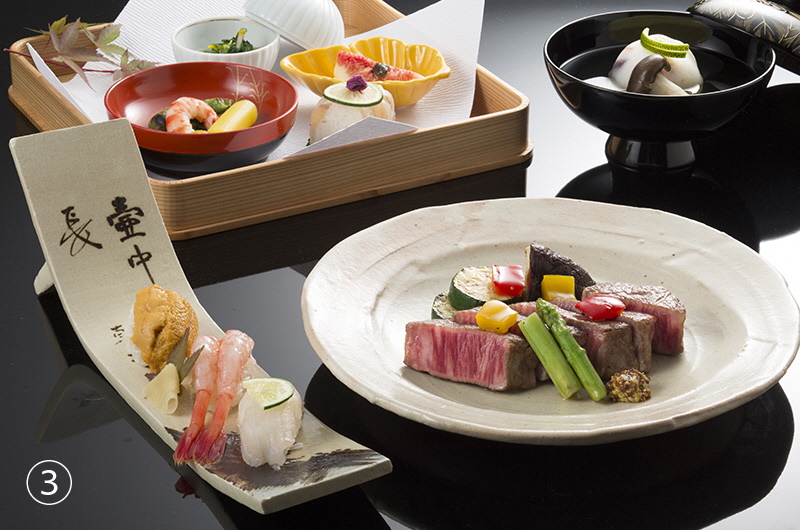 Kyoka Izumi was born in Kanazawa and is known as one of the leading novelists of the Meiji era. It is said that Kyoka, who had lost his mother at an early age, was much cared for by his aunt who lived in Tatsunokuchi Onsen at that time. Visiting his aunt often, he honed his sensitivity to women by watching the beautiful and glamorous geisha who worked in Tatsunokuchi Onsen. During an extended stay at the inn, Kyoka penned “Umi no Naru Toki” (The Time the Sea Rang)", which was set at the Matsusaki Inn of that time. The inn could be considered to be the starting point for Kyoka’s career as a novelist. Even now, as time has passed, it is thought of as the family room of Kanazawa to many customers who reside in and out of the prefecture, because of its location in the suburbs of Kanazawa. We recommend this Japanese inn for any quality vacation. 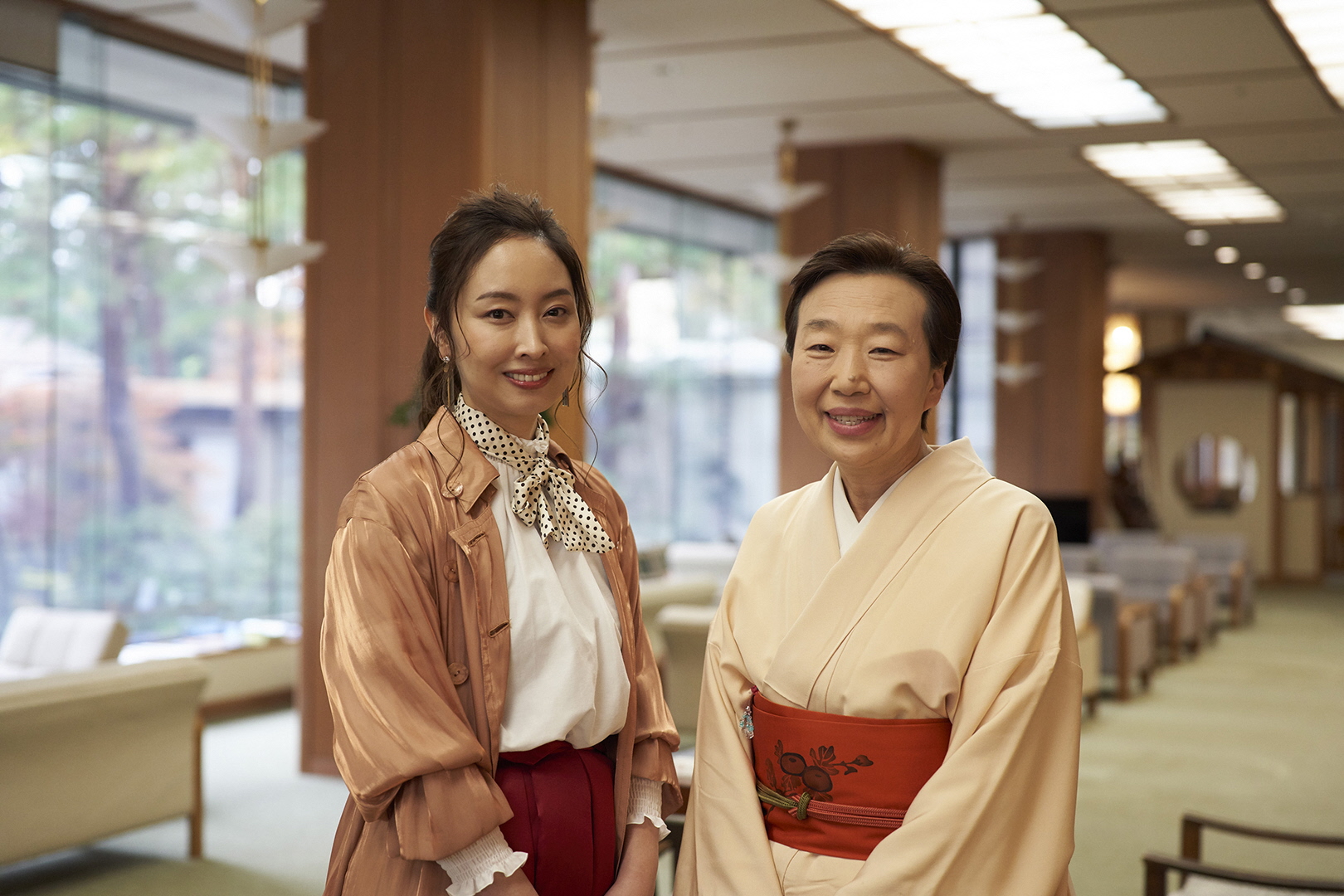