A visit with the Ishikawa Zoo. 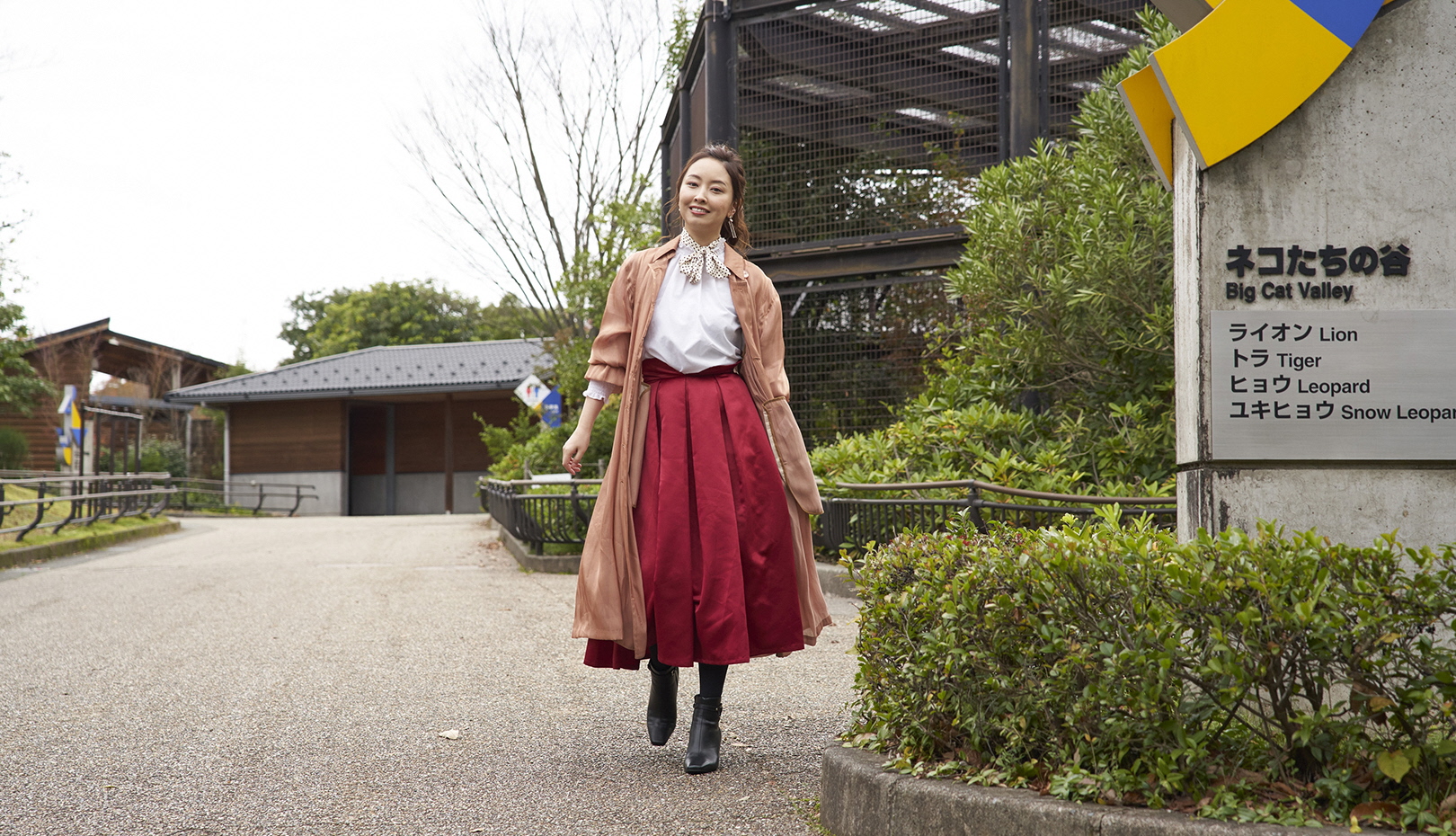 The Ishikawa Zoo opened on October 9, 1999, as “a zoo to enjoy, play, and learn,” as its concept. As a fun learning location to foster children’s dreams, the zoo is where you can enjoy observing the ecology of animals surrounded by natural greenery and learn about the spirit of nature conservation and animal welfare. The animal-friendly, eco-friendly, and people-friendly facility utilizes the natural terrain of the 23 hectares to recreate a natural habitat for the animals. The park is closed on Tuesdays (following weekday if Tuesday is a national holiday; New Year’s holiday Dec. 29th – Jan. 1st), but the zoo is open throughout spring and summer breaks with consideration for school children. 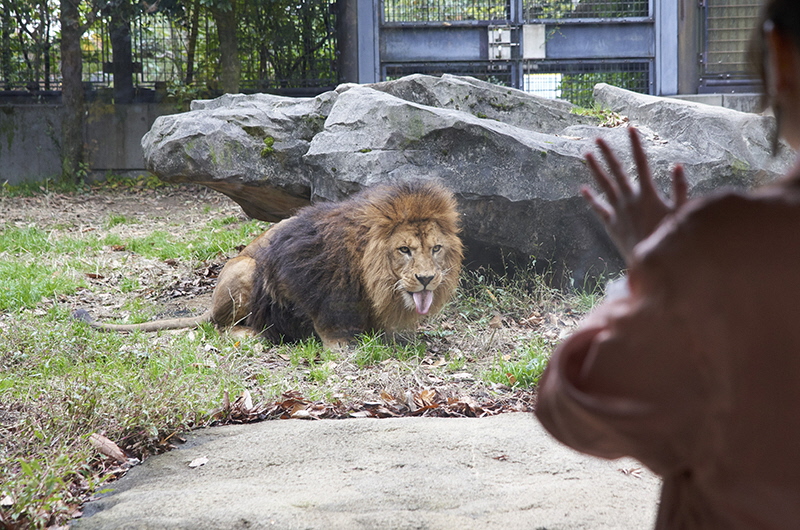 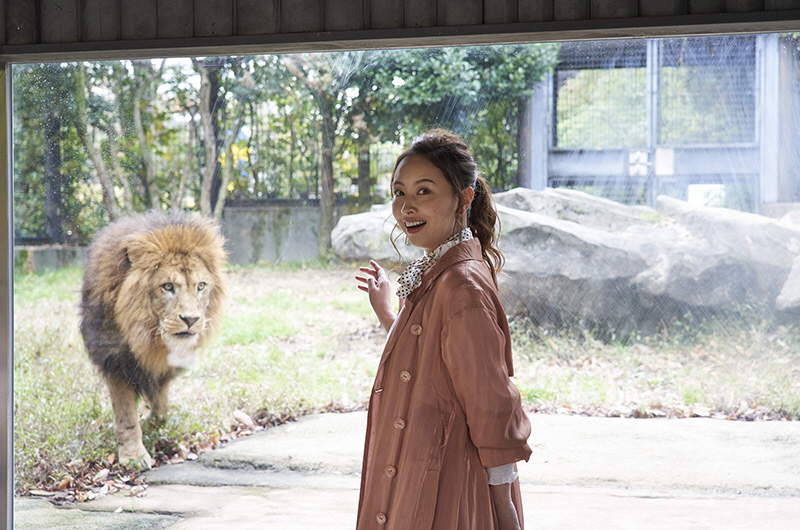 Felidae are the most advanced group of carnivores with physical abilities to catch prey. Have a close look at the sharp claws that can be extended and retracted, the large sharp canine teeth, and the powerful body. Lions, tigers, leopards, snow leopards, and four other members of the Felidae family can be seen up close in both indoor and outdoor exhibits.
Along with tigers, lions are the largest cats. Females do not have manes, but males have a splendid mane which covers the head, shoulders, throat, chest, and elbows. The mane is proof of an adult male and is said to take five to six years to fully mature. They cooperate together to catch prey, and then it is shared. Male-only groups have also been identified, often consisting of younger males that do not yet have strength. Most of the prey is antelopes such as gnus, but at times large mammals such as young elephants and giraffes are also caught through teamwork. Currently , Chris, the male and Annin, the female, can be observed alternately in the indoor and outdoor exhibits. The Viewing Shelter at the outdoor exhibit provides an impressive view. Also, be sure to see the lion feeding using the feeding device. The ordinary yellow and brown striped tiger along with the white tiger are on display. Tigers are widely distributed from the boreal zones to the tropical regions. The largest Siberian Tiger inhabiting the Siberian region in the boreal zone exceeds 350cm in length, although some of the smallest in the tropical regions are only 210cm. They live alone except during mating season and hunt deer and wild boars. The largest and most powerful of the Felidae family, they are endangered due to poaching for the purpose of their fur and herbal medicine uses. Currently, you can meet the Bengal male, Madras, and the Siberian male, Mitake. The white tiger’s body is covered by white fur, but it is no different from an ordinary tiger in terms of type. Compared to normal tigers, the stripes are often lighter or brownish. You can observe up close that the eyes are a pale blue (normally a yellowish brown) and the paws are pink (usually black). They used to inhabit nature in India, but they can now only be seen in captivity. 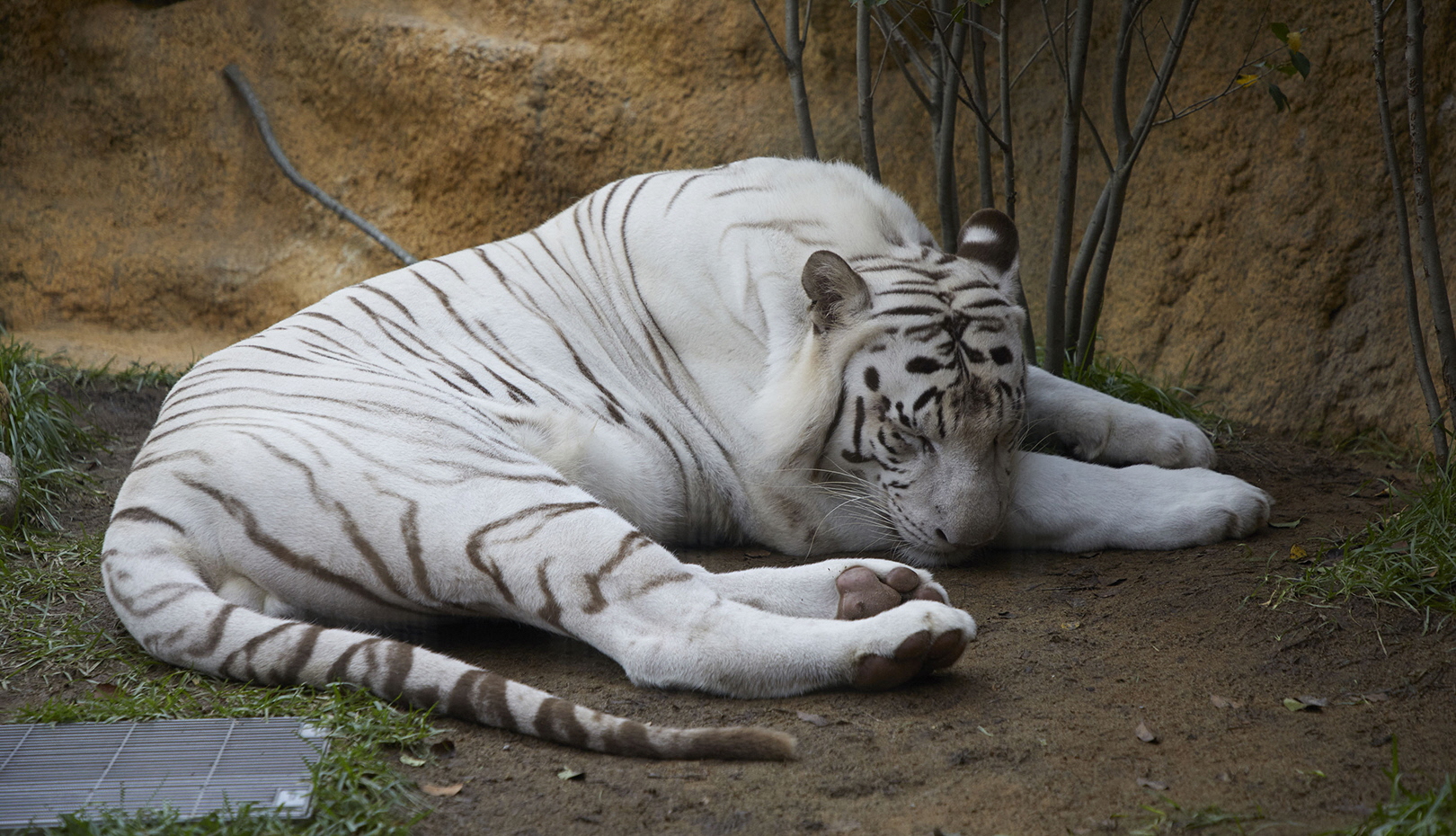 Snow leopards are of the leopard family that live alone, often resting in rock shades during the day, and catching small (mice) to medium-sized (goats and deer) mammals and birds during the night. They live in mountainous areas with an altitude of several thousand meters and move to higher altitudes (approximately 4000m) in the summer and relatively low altitudes (approximately 1800m) in the winter. They feature long fur, small pinna, and thick legs and tail to adapt to the cold. Additionally, the dense fur on the soles of their feet makes it difficult to slip even on snowy slopes. They are endangered due to extermination as vermin that attack livestock and poaching for use of their fur and as medicine. The Patagonian mara inhabits the grassland called “Pampa” in South America and mainly feeds on grass. It has big ears resembling the rabbit but is actually a rodent. The Patagonian mara loves sunbathing and can often be seen resting together in the sun. At night, they rest underground in burrow nests. During mating season, they give birth in a shared den and usually only feed and raise their own young. Their slender legs and the white fur on the buttocks resemble that of a fawn. Such appearances can be seen from a special passage with a glass ceiling. The red pandas live in relatively high altitudes in western China and do not do well in the summer heat of the Hokuriku region; therefore, during the summer, they spend time indoors with air conditioning. Their staple foods are bamboo, bamboo shoots, fruits, etc., but they are omnivorous animals that also eat small animals, bird eggs, insects, and so on. They can skillfully use the toes and the palm of one of their front paws to hold and eat food. Because they are nocturnal, they can be found sleeping in their favorite trees during the day. The Sichuan Red Panda, which lives in western China, can be seen here. There are five red pandas in total that include the male “Aqua,” the female “Ayame,” their two cubs “Marine” born in 2014, a female “Sun” born in 2015, and “Haru” that arrived in 2018 from Akiyoshidai Safari Land. 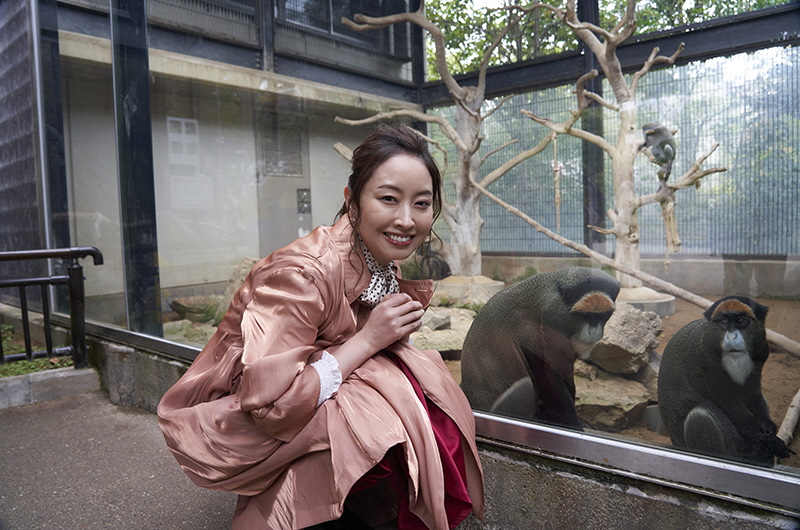 The De Brazza’s monkey has distinctive facial fur color with orange hood-like fur on the head, and the white fur from the nose to the chin looks like a beard of an old man. There are four monkeys to meet here; the male “Jeep,” the female “Yumi,” and their two offspring “Jungo” and “Lorry.” 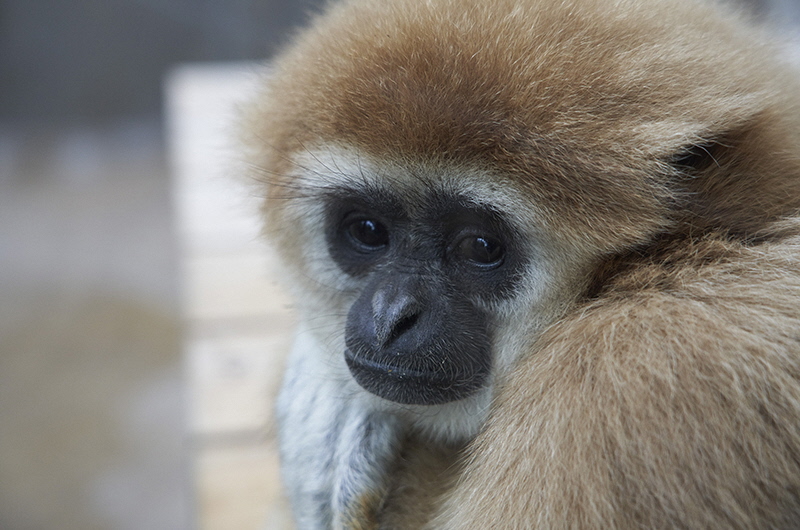 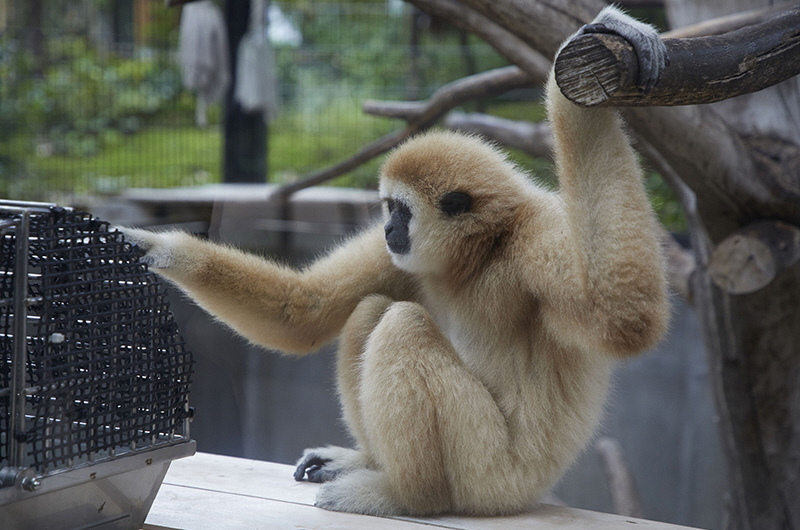 The white-handed gibbon “Sakura” that approaches us. (photographed November 27, 2019)

The name of the white-handed gibbon comes from the fact that the color of their coat on both hands is white. Adapted to tree life, they move by alternately grasping tree branches with their long arms as if swinging on money bars. They often call to each other and sing together, making their presence known to their surroundings. Currently, a family of 4, the parents and their two offspring, can be observed living together. “Luke” (black male) and “Sakura” (brown female) are very good at raising their young and have had four offspring to date. The ring-tailed lemur is one of the most primitive type of primates, with a sharp nose and a hairy face, they have a different look than the common monkey (true monkey). The name comes from the striped pattern that looks like a series of rings on its long tail that came to be “ring-tailed lemur.” Because they cannot control body temperature well, they can be seen gathered together in a small area to keep warm even in the wide habitat area in the winter. 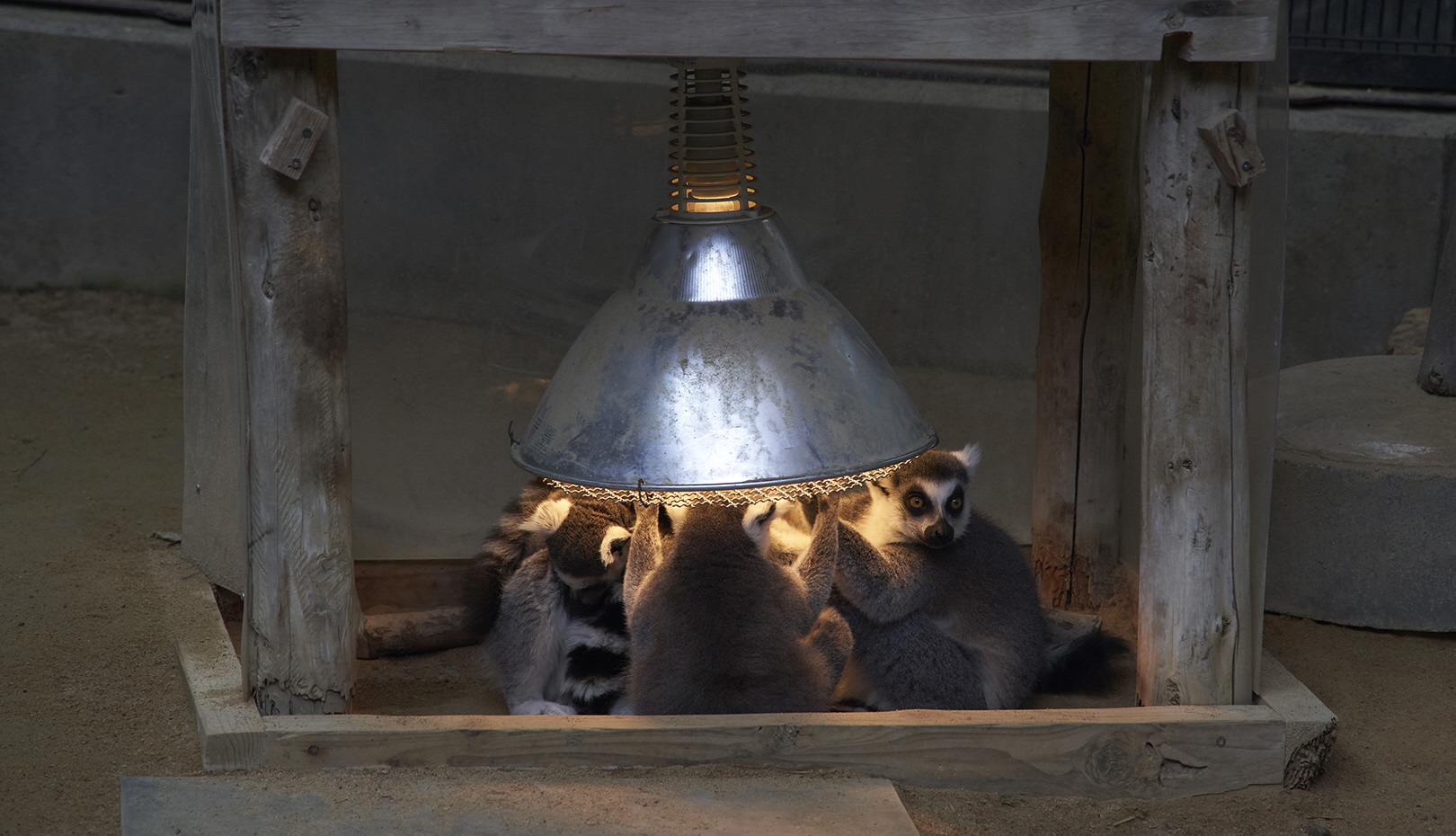 A humorous ring-tailed lemur gathered together for warmth (photographed November 27, 2019)

It is barrier-free for all visitors and a comfortable place for the animals. In the history of zoos, the role as a community educational facility has become more important than that of a leisure facility. In addition to focusing on animal breeding, we also contribute to wildlife conservation activities.
The Toki Satoyama House, a facility not found at any other zoo, opened on November 19, 2016. You can experience the feeling of life in the Japanese satoyama through observing the crested ibis feeding up close and observing the life of the ibis in an environment that recreates the satoyama with a terraced swamp and trees. In the learning exhibition corner adjacent to the exhibition hall, you can learn about the crested ibis by comparing their beaks and feet with other birds and by touching their wings. The entire body is almost completely covered in all white feathers, and the wings that have a peach vermilion color area is very beautiful. During the breeding season, they smear the gray-black secretions on the neck themselves to change the color of their upper body. Because the color is smeared during bathing, the color seems darker immediately after bathing. They once became extinct in Japan, but thanks to the efforts of various people, the numbers have increased, and we have been able to return them to their last habitat of Honshu, in Ishikawa Prefecture. The crested ibis at the beginning of the breeding season. Change of body color to gray-black (photographed on March 31, 2019)

The rock ptarmigan, designated as a nationally protected species, is distributed in the alpine zone above an altitude of 2400m in the central region of Honshu, and global warming threatens their extinction. It protects itself from natural enemies by changing wing colors depending on the season, and its toes are covered with feathers, which act as snowshoes when walking through snowy mountains. In the wild, they feed on alpine plants and insects. Early in the Showa ear, they were believed to have become extinct in Hakusan, but a single female was discovered in 2009 and became a topic of news. In addition to the Svalbard rock ptarmigan, a subspecies that inhabits the Arctic Circle, which has been on display for a long time, the Japanese rock ptarmigan has also been on display since March 2019. The polar owl is a large owl that lives in the tundra of the Arctic Circle. They are active mainly in the mornings and evenings, but in the summer with the white nights of the Arctic Circle with no darkness at night, they are active even during the day and prey on small rodents. They are spotted rarely in Hokkaido of Japan. Mature males have a nearly pure white body, while females and young birds (both male and female) have a black striped pattern. Along with the striped pattern, it is easy to distinguish between males and females because females are larger than the males. Like the rock ptarmigan, it has feathers on its toes. 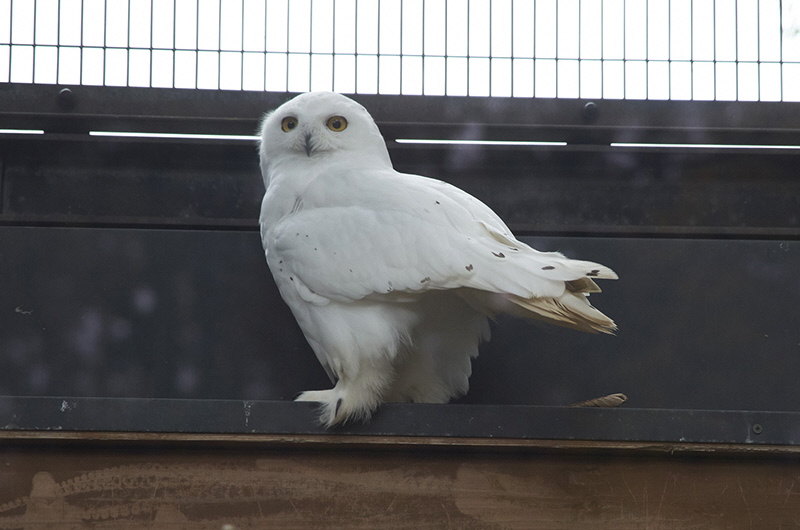 The Sea Lion & Seal Water Land displays aquatic mammals living in the ocean and lake. An outdoor exhibition pool with 320 tons of water holds a heterogeneous exhibit of California sea lions and spotted seals. The facility allows you to observe them swimming in the large pool from the top and side, and various differences can be discovered by observing the body shapes and how the sea lions and seals swim. In the indoor exhibition pool next to it, the Baikal seals are on display swimming leisurely. 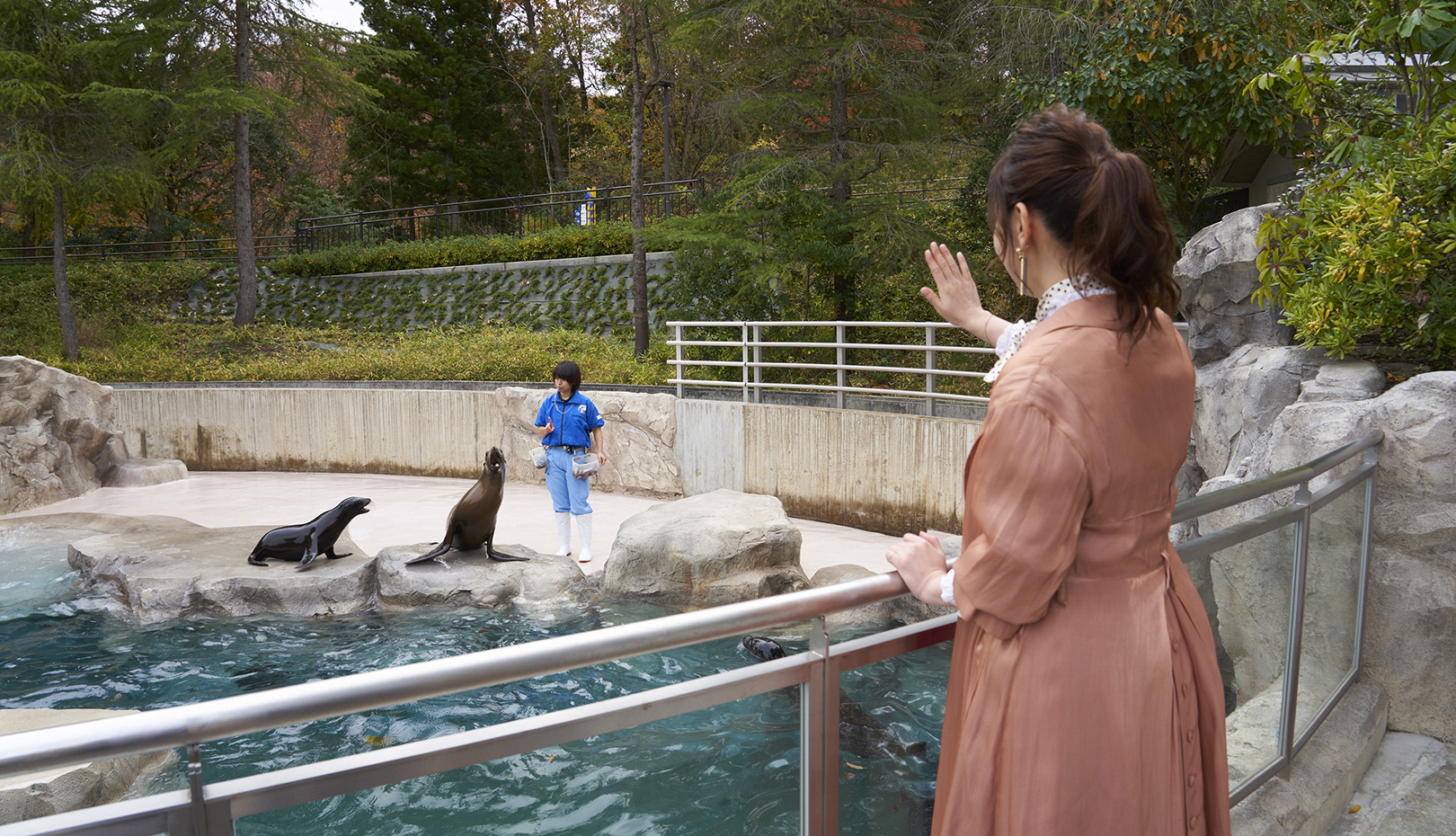 This is the female California sea lion, “Chocolate.” The sea lions move their fore flippers back and forth to propel forward as if swimming. The hind flippers do not move very much and are used only for steering. They can swim as fast as up to 30km per hour. At sea, they like to eat squid and octopus as well as fish. At Ishikawa Zoo, they are mainly fed mackerel. Females grow to approximately 100kg, but males grow to be huge, exceeding 300kg. On the parietal region of the male, a bump-like ridge that does not appear on the female develops. During the breeding season, a polygamy-specific group called a harem is formed, and mating and deliveries take place on land. If the female abdomen is observed, you will see four nipples. Currently, the male “Ku,” the female “Chocolate,” and “Leo” born in 2018, can be seen. As well as creating a comfortable space for the animals, recreating an environment close to nature gives peace of mind for the visitors to enjoy. There are plenty of gift shops with many products such as stuffed animals and cookies that are only available for purchase here, and there are many restaurants and rest areas to enjoy lunch. The zoo is spacious enough so that the entire day can be spent enjoying the park. Our zoo is enjoyable not only for children but for adults as well.